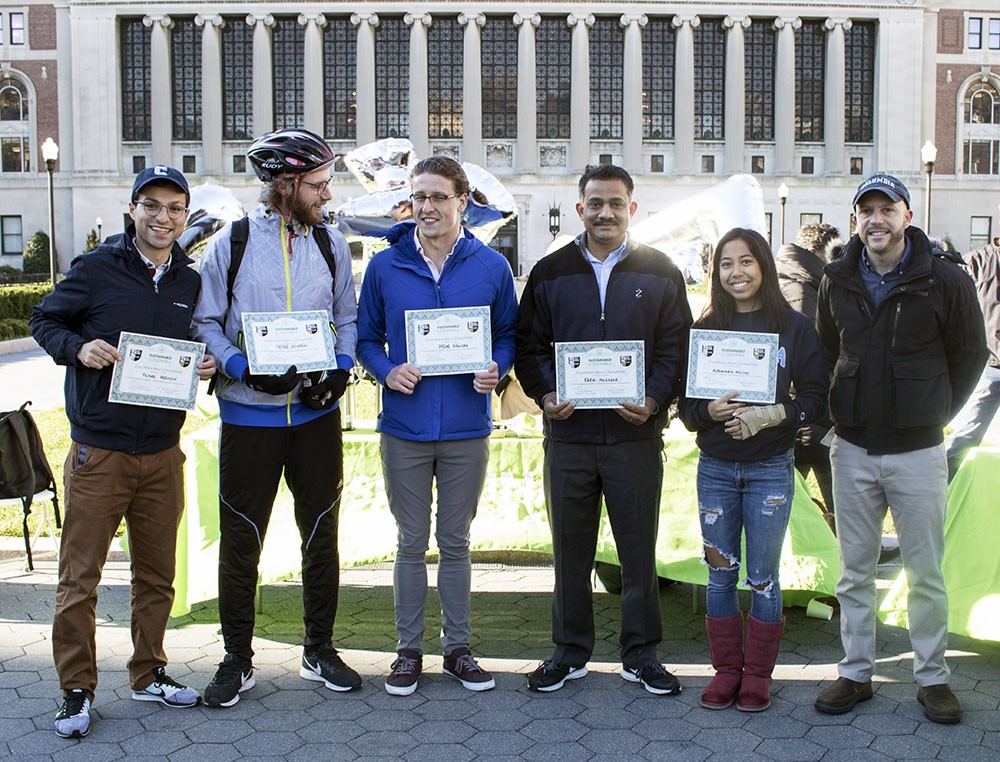 Sustainable commuters were celebrated at the 2nd Annual Bike Champions Recognition Breakfast on October 25, 2018 on College Walk at the Morningside campus. 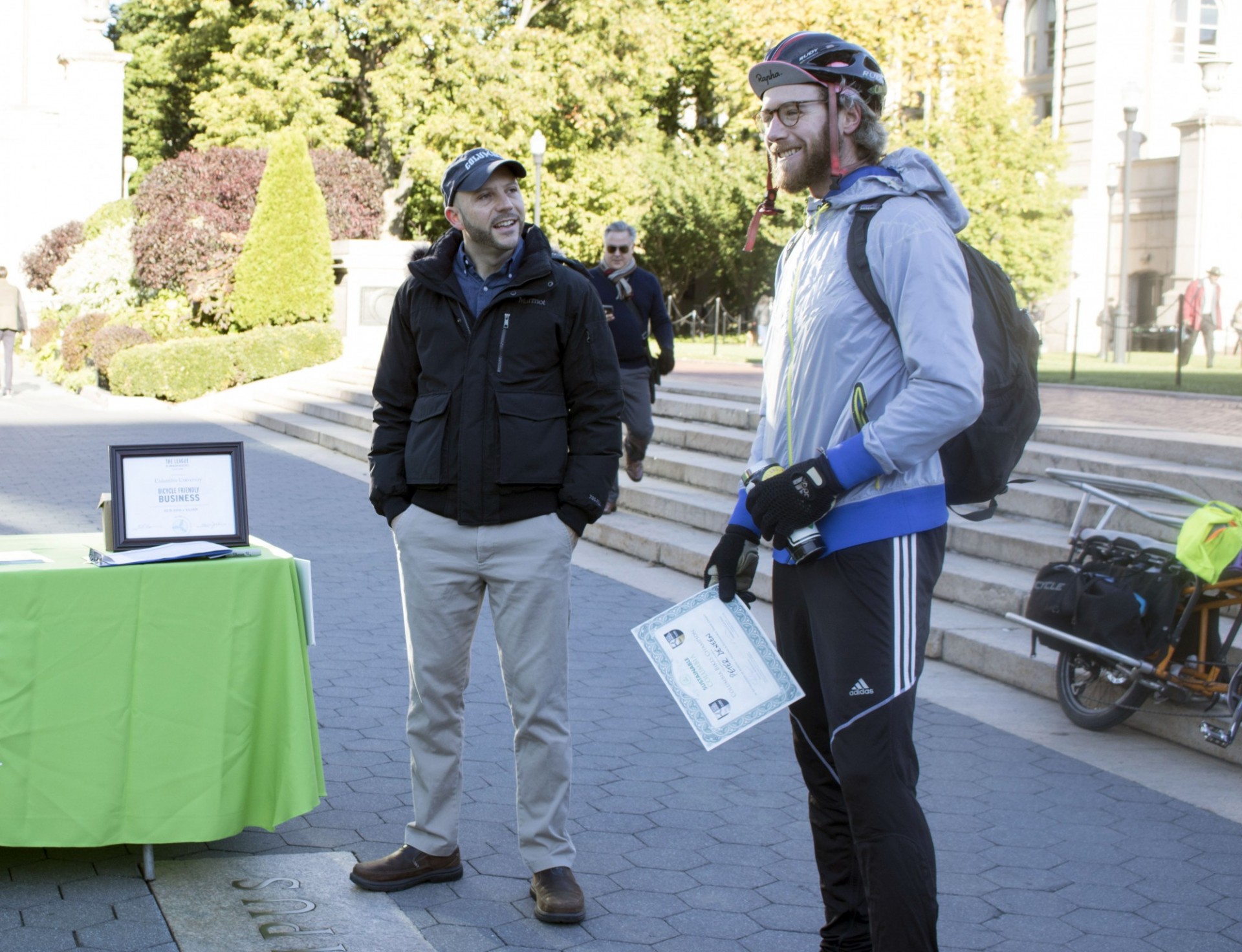 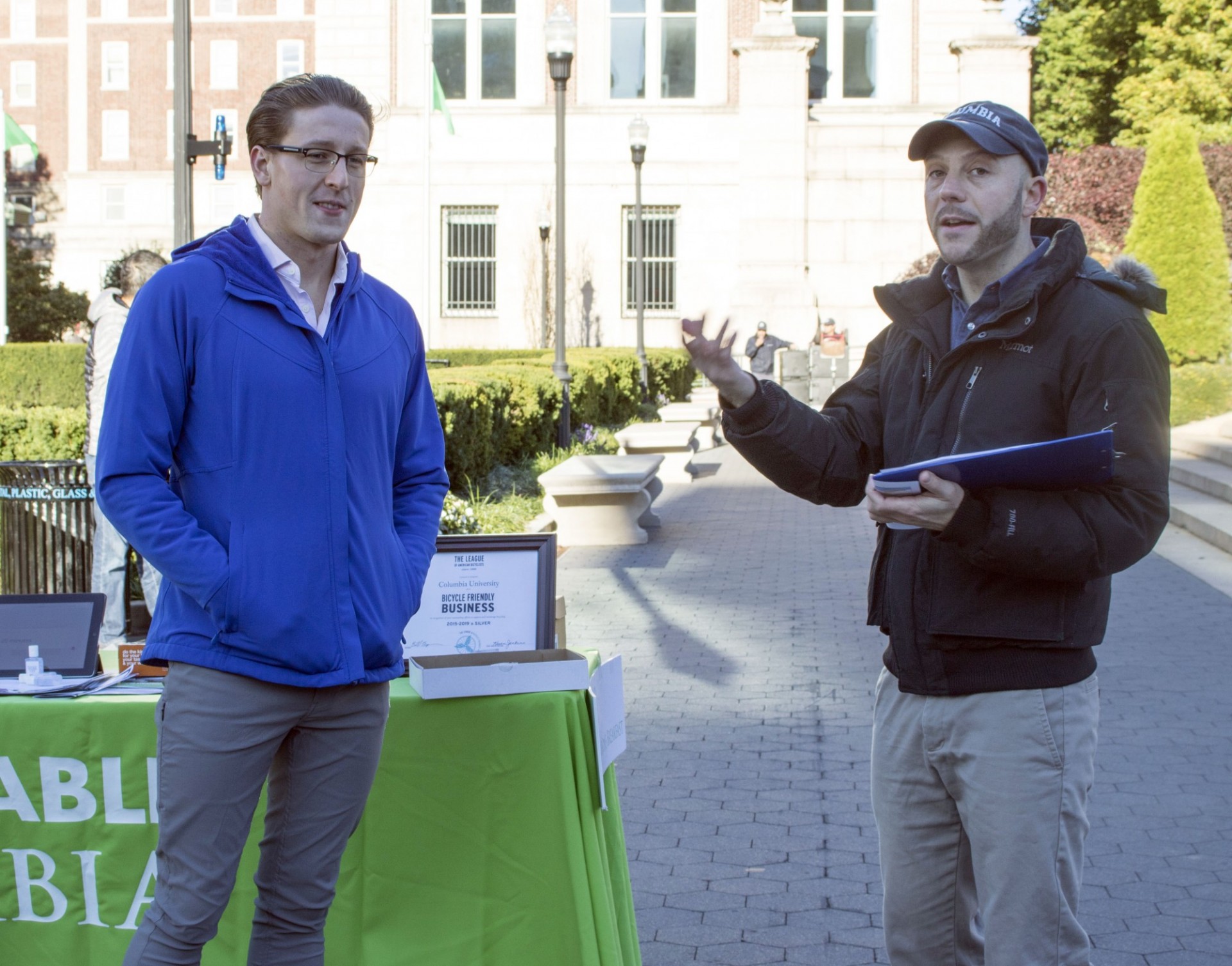 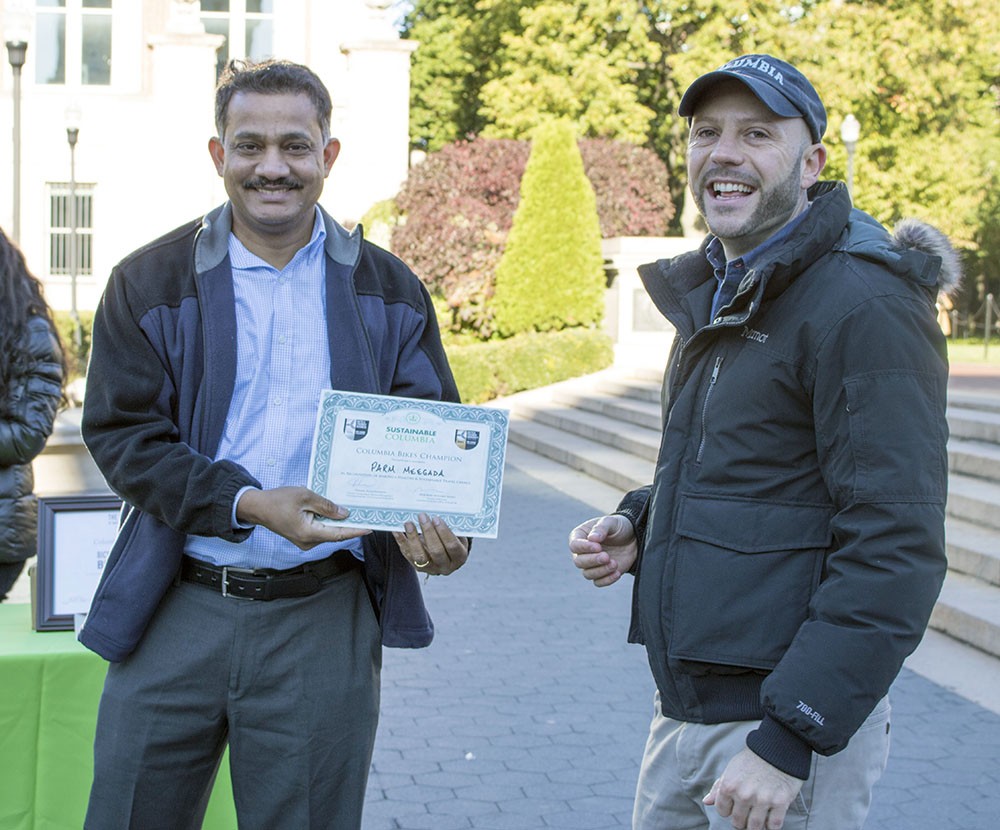 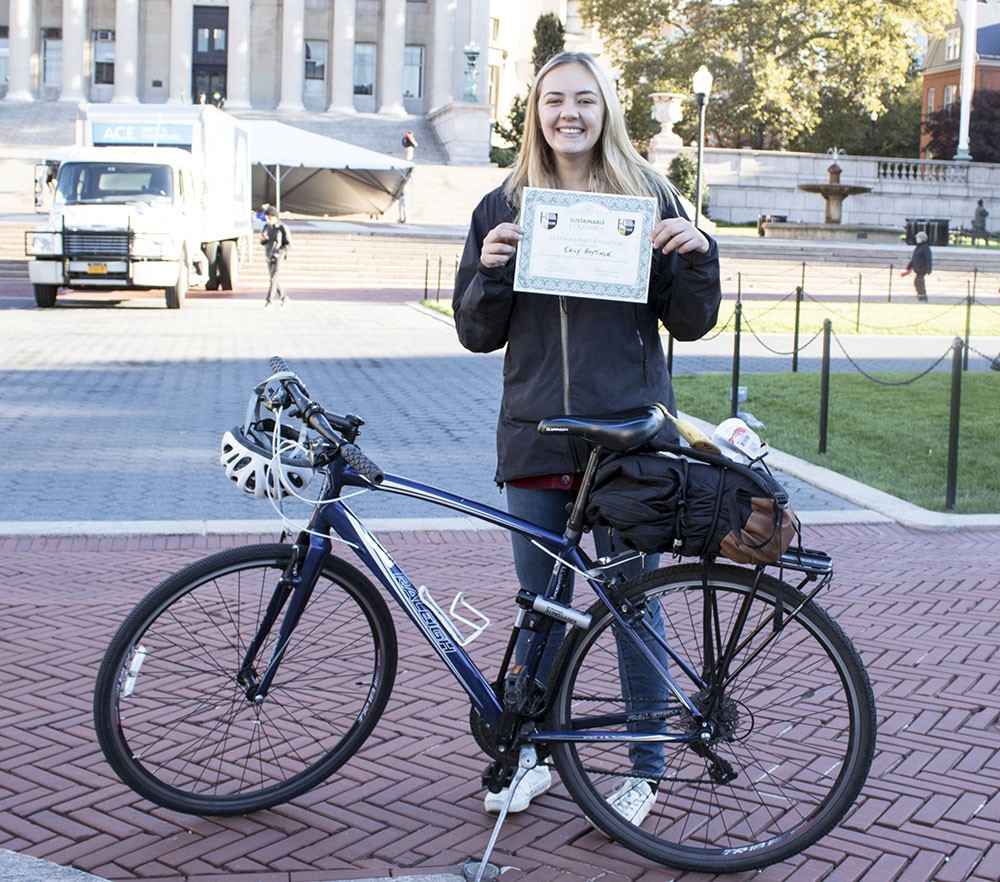 "I love my bike commute! I bike down from 147th Street along St. Nicholas and next to two parks. It is a really great start to my day."

"I bike all year around. All the way up Riverside Drive and then across campus to get to SIPA. Miles are short, but I also cycle all over NYC. It is the most sustainable way of getting around, flexible, active, and you see more of the city. Biking is also more financially viable."

Steve Sholdra, Center for Career Education, commutes from Little Italy in the Bronx:

"I love the biking commute to work! It's a seven mile trip each way for me, but since I have to get to campus early each day, I get to watch the sunrise right behind Yankee Stadium as I ride past it... every single day I'm tempted to stop for pictures! I have two routes to take, depending on the time of day I'm riding (due to High Bridge only open during daylight). First, I can ride home up St. Nick Avenue all the way to the High Bridge, ride across the bridge, and then ride along University Avenue all the way until it meets Fordham Road, and then I'm practically home! It's a great commute because it only involves one right turn (to turn onto High Bridge) for my entire ride, even though I live over by Fordham in Little Italy.

My second commute is up St. Nick Ave, then across the Macombs Dam Bridge, right past Yankee Stadium, then making my way up to Grand Concourse then over to Park Avenue via Tremont, which is a gorgeous ride because I get to go on a bike lane almost the whole way, and Park Avenue is right along the Metro North tracks so it's amazing.

Thank you so much for providing us with the biking parking garages! They're absolutely incredible!"

"My commute is about 15 miles round trip daily. The Queensboro Bridge and Central Park are the highlights of my year-round commute. I ride alone but there is usually a flock of other morning commuters. I choose my bike chiefly because it is zero emissions. Secondly because self determination is important to me - I don't like to be at the mercy of the MTA's inconsistency and biking is also faster. Third for the exercise. Fourth because I just feel better after a commute above ground. And fifth, its free!"

"My ride is quick and (luckily) 40 percent in a bike lane. I ride down St. Nicholas Avenue so I get an uninterrupted tree lined start. Since my ride is so quick, I ride every single day regardless of weather. Bike commuting is much faster than public transportation would be for me. In certain conditions I'm even faster than the cars on the road!"

"I love being outside and the fresh air. Biking is the environmental and socially-conscious choice of transportation."

Ru-Lian Hsu, Teachers College, commutes from campus to the Lower East Side:

"I've been commuting by bike in NYC for more than a year. I usually bike to grocery shopping (at Trader Joe's on 72nd St or 93rd Street) with my big hiking backpack for an entire week's supplies. Since this July, I have commuted to my office about three times a week. The office is located in the Lower East Side, 10 miles away from my apartment on 121st Street. I bike through the Hudson River Greenway and pass by Battery Park to the East River Bikeway.

There are several reasons why I choose a bike commute. In the beginning, I just wanted to save on transportation costs. I even biked during the winter when it was really freezing cold, and it was a challenge for me to cycle under those conditions. You have to put lots of clothes on but when cycling you start sweating, and get wet and cold when you reach your destination. You might feel cold all the time and still have to bike to your place in the end, which is a battle for me and my bike to overcome under the unbearable weather. However, after getting used to biking around NYC, I've started enjoying the energy and relaxation it brings. Though it is a long way to my office, I get more energy after morning cycling to the office and feel relaxed after a long day work by cycling along Hudson River and watching the sunset. I hope I can hold these beautiful experiences in mind and keep cycling in the coming winter and snowy season."

"I ride from 148th and Broadway to campus at 116th and Broadway. Sometimes I take Riverside Drive instead. I do it alone and I choose to commute by bike because it forces me to exercise, is green, is flexible, is cheap, and is just as fast, if not faster, than taking the subway."

"I ride my bike over the George Washington Bridge from Fort Lee and park it at CUIMC. I take the subway down to Morningside. I ride alone. I love the view from the bridge, taking my bike cuts down on my transit time, and I get a little workout in before the day begins. It's also cheaper!"

Email us at [email protected] to be featured!